At 4.30 am local time, the residents of the San Fernando Valley region of L.A were awoken by a shallow magnitude 6.7 earthquake. It is estimated to be one of the most costly natural disasters the state has faced causing up to 40 billon US dollars and killed over 60 people. 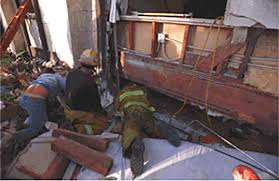 The earthquake struck along a fault line which was previously unknown off, the Northridge blind thrust fault. It produced the highest ever recorded ground motions at the time and literally threw many buildings off their foundations. It sparked greater mapping of the L.A fault systems so places could be better prepared for further destructive quakes in the future.

Some of the most dramatic pictures of the destruction came from the many freeways and interstates which suffered structural failure and/or collapse.

One of the most unusual outcomes of this earthquake was the outbreak of coccidioimycosis, or more commonly known as Valley fever. There were over 200 cases reported in the weeks after the quake and 3 fatalitites. Valley fever is a respiratory disease brought on by airborne spores of fungus. It is thought that landslides caused by the earthquake sent a cloud of the spores in the the air which the wind carried to surrounding areas.

After months of increased activity at the stratovolcano in the DRC, a 13 km fissure opened along the southern flank of Nyiragongo in a matter of hours. The fissure reached all the way down to the town of Goma and Lake Kivu.

Over 400,000 people were evacuated from Goma and the surrounding area, many across the border to Rwanda. Despite these efforts 147 were killed, mainly from asphyxiation and some from collapsing buildings from volcanic tremors. About 4,500 buildings were destroyed in Goma and two-thirds of its airport left unusable as lava devoured the run ways.

When the flows reached Lake Kivu, due to the high gas emissions, a new fear was put in place. Similar to events at Lake Nyos 1986, there was a chance that the high emissions of carbon dioxide and methane could be stored in the lake waters and released lethal limnic eruption. Although this was not the case there have been numerous cases in the area around Nyrigongo of particularly children dying from asphyxiation due to random degassing of the volcano. An experimental syphon was put in place in 2001 to try to limit the amount of gas in the bottom waters, but it was not untill 2004 when an energy company wanted to harness the gas as a resource, did any really system come in to place to limit the risk of limnic eruption.

Nyrigongo is one of the 17 decade volcanoes, ones believed to pose greatest risk to human life. Caused by a mixture of rifting and hot spot activity, unlike many volcanoes of its kind, its lavas have an extreamly low silica content. Predominately melilite nephelinite, instead if more common more common basalts, it is extreamly fluid and can reach speed on average of 100 km/ph. It has also had a near constantlty active lava lake giving us the gentle reminder that it can fatally burst to life at any time.

Apologies as this should have been publishes yesterday.

Volcanism takes many shapes and forms, not all volcanoes eruption violently and explosively like Mount St Helens in 1980 neither do they all have a constant flow basaltic lava flowing from their vents such as Kilauea. Degassing can be constant at active volcanoes, poisonous gasses such as carbon dioxide and sulfur dioxide can seep out through the rocks even when all seems quiet. This can have devastating consequences on local population and wild life, but very few times has it been quiet so fatal as the summer on 1986 in Cameroon.

Lake Nyos is a crater lake which lays in the Oku Volcanic Field at the northern end of the Cameroon Volcanic Line. This area is known to degas large quantities of varying substances most of which dissipates in to the atmosphere. However, water is able to dissolve and store quite high quantities on CO2, especially the cold bottom waters of a water body such as Lake Nyos.

On 21st of August 1986 at approximately 9.30pm local time, a cloud rich in CO2 swept the surrounding area from the lake. Over 1700 people were killed as well as thousands of cattle and other wildlife. Air has to be just 15% CO2 for people to loose consciousness and have difficulty breathing; the cloud is believed to have had a much higher concentration then that. People simply fell asleep never to wake up, dying of asphyxiation.

There are several theories to the exact cause of the gas cloud. Firstly was the idea of a ‘carbon dioxide eruption’ from the volcanic system; it literally burped out great amounts of the gas in one go, so much so that it couldn’t be held in the water and seeped in to the atmosphere and down to the surrounding villages. The second theory was based on an event two years previous in the August of 1984 at Lake Monoun. A landslide stirred the water of the lake causing ascent of the carbon rich bottom waters. No longer under the pressure of the depths the CO2 began to exsolve (bubble out of solution) and was release in mass in to the air. Unlike at Nyos this was a smaller incident only claiming 34 lives but it gave scientific insight to what occurred two years later. There were no signs of any landslide on the banks of Nyos in August on 86′ however there had been heavy rainfall. Rain waters would have been much colder, and therefore denser, than the lake water causing a convective overturn. Again as bottom waters rose the dissolved gases would have been released with catastrophic effect.

What ever the cause, a painful lesson was learned and in 2001 a large polyethylene pipe was placed in to Lake Nyos, with a second being put in place in 2011, to siphon water continuously from the lower layers to the surface so there is never an excessive build up of CO2.