Just moments after posting this originally images came through of a pyroclastic flow at Sinabung at 14.05 GMT.

Finally I have found a half decent update from the Global Volcanism Program albeit for about a week or two ago. By the 6th January the lava front had stalled in areas near S Ilheu de Losna where as was still advancing at a slow rate in the northern end of the town. Houses are still being overtake by the flow but decreasing temperatures of the lava means we could be nearing an end to the destruction. For the first few days of the month sulfur dioxide emissions were averaging at 1200 to 1300 tonnes a day.

Etna saw out 2014 with some pretty explosive activity on the 29th December. The new southeast crater had consistent but small emissions and incandescents. Explosions intensified on the 2nd and 3rd sending material 150 meters above the crater rim and an ash plume which traveled southwest.

Activity has been pretty on going since December 28th and shows little sign of slowing. On January 1st and 2nd, strombolian activity was seen at th Voragine crater, which has been inactive for over two years.

Based on pilot observations an ash plume rose to just over 10,000 ft on January 6th.  This is the first notable activity at the volcano since 2009. The main caldera is submarine.

Darwin VAAC reported that a ‘significant’ eruption began at 14.47 local time on January 6th.  A lava flow has travelled 2 km down the WSW flank although no warnings have been issued. An ash plume rose to roughly 27,000 ft how ever nothing can be detected on satellite imagery due to poor weather conditions. The alert remains at 3 on the four point scale.

As of January 5th the lava flow now covers an area just over 83 square kilometers. although the overall intensity of both flow and seismicity is less then a few months ago, the fissure eruption shows no sign that it is coming to an end.

On December 31st the alert d 2 and local residents were warned not to go within a 1.5 km radius of the crater. White plumes has been drifting from the Ratu crater since late November, but an increase in seismicity and ground deformation has led to the apparent rise in threat.

KVERT reported a lot of strong activity at Sheveluch towards the end of December including incandescent avalanches and fumerolic activity. The aviation code was kept at orange as an ash plume travelled both 60 km westwards and over 370 km ENE. Satellite images indicate a thermal anomaly over a new lava dome on the northern flank.

As promised, this is a current catastrophe warrants its own post, especially as most of the world does not see it news worthy.

The islands of Cape Verde have become a popular destination for tourists off the coast of Africa. Their origins are volcanic;  as the African Plate moves across a hot spot. Although few of the volcanoes are believed to  extinct the island of Fogo which is thought to sit directly above mantle is rather active.

On November 23rd Pico de Fogo rumbled life again after laying in quiet almost 20 years. In an eruption true to typical hotspot volcanism, there were no huge blasts or billowing ash clouds sent rocketing in to the stratosphere, what there was was lava, volumes and volumes of basaltic lava. Moving at average speeds of just 10 m/ph basaltic lava is easily outrun and the villages like Portela and Bangueira were able to evacuate meaning little threat to human life. Does this therefore follow that there was no threat at all?

A month on the flow still advances completely devouring the towns of Cha das Caldeiras and Portela. Homes, schoools, businesses completely gone with former residents left helpless on the sidelines. Buildings in Bangueira are also being destroyed and the lava is heading towards other villages. 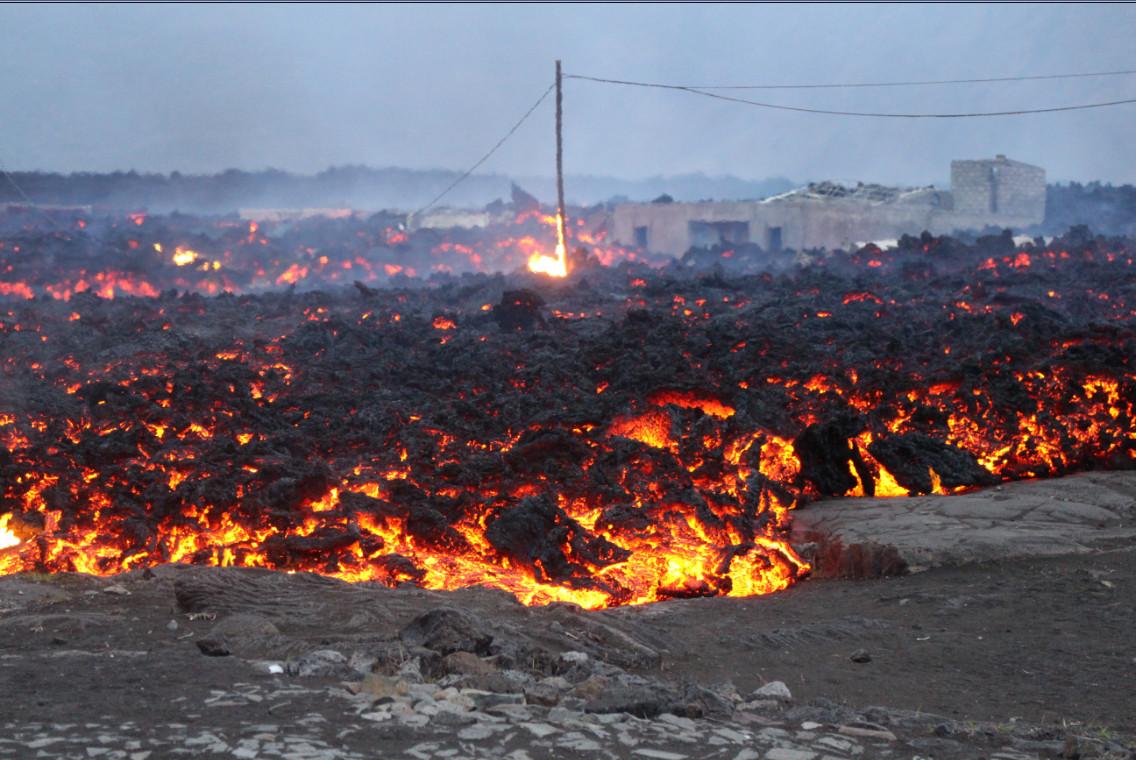 Yet what makes this situation worse is the lack of world support or even knowledge of the unfolding situation in Fogo. Sorry but to me peoples homes being destroyed, livelihoods lost is a big deal. Sadly Kim Kardashian’s naked backside seems to have more media interest than the poor people of Cape Verde.

I have mentioned on several posts that world ignorance to geological events is unbelievable. But what actually makes such news relevant to world media or aid?

Fellow member of the Open University community has a similar view and wrote as such for Science2o. “Does Ebola on mainland Africa and a typhoon in the Philippines mean that there really is no time for an event such as this in our mainstream news agenda? Or do we care about volcanoes only if there’s a chance of them inconveniencing our air-travel plans?”

I wonder how quickly this may change if people understood Fogo’s past and the danger that lays beneath the lava…..

The eastern flank of Fogo is scared from a collapse caused by an eruption around 40,000 years ago. The mass of rock, debris and volcanic material crashed in to the ocean causing a mega tsunami that make 2011’s Sendai disaster look like ripples in a puddle. On the neighboring island of Santiago, evidence of the catastrophic wave can be found over 100 m above sea level. It would of swept far inland on the west coast of Africa and decimated the coasts of Portugal and Spain.

The flanks of Fogo today are still not considered the most stable although it is thought we should not see another collapse in quiet some time, pending on future eruption styles. But the idea that this small volcano, which is currently seen as insignificant to the media, could threaten people on a global scale says so much about peoples ignorance to the planet we live on.