The 1902 eruption of Mount Pelée in Martinique is always been one which fascinates me. On one hand, it is a perfect example of a volcanoes power to decimate entire communities in an instant and on the other it shows humanities ignorance to heed warnings given by the Earth of impending doom. Modern day Martinique is a paradise island in the Lesser Antilles archipelago, popular with holiday makers but unspoiled by the usual tourist tack. Today Fort-de-France is the capital and home to just over 90,000 people. Back in 1902 this title was given to city of Saint-Pierre, further north than Fort-de-France, and sat at the foot of Mount Pelée.

Although the entire island arc is of volcanic origins, owing to the North American plate subducting under the Caribbean plate, it has had very few volcanic events in recent history. On Martinique, Mount Pelée is the most striking volcanic feature towering 4583 ft on the north-west coast. Eruptive phases have been split in to three phases; initial, intermediate and modern which began about 5,000 years ago. Activity is now quite sporadic with about 30 confirmed eruptions so far in its present phase. Prior to 1902 Pelée had only seen minor phreatic eruptions 1792 and 1851 although locals were all to conscious of its fiery past. During the summer of 1900, activity seemed to begin around the Etang Sec crater. Fumarolic and seismicity was low was little attention was paid. In the January of 1902 fumarolic activity increased dramatically and by the February high levels of degassing killed hundreds of birds which many locals thought to be just down to disease. Snakes began fleeing the fumes and that spring saw a record number of lethal snake bites killing over 50 people, mainly children. In the April seismicity began to increase dramatically but still residents of Saint-Pierre still did not fear the mountain.

On April 23rd 1902 the actual eruption began. After a relatively minor explosion ash rained down on its southern and western flanks. A further blast on the 25th sent an ash column high in the sky above the island from the Etang Sec crater. The following day the blasts calmed down, although ash fall continued. At the time Martinique was going through as major political shift. White governed since France took control of the island in the 1600’s, there was now a black opposition leader looking to take power and a major election loomed on May 11th. The residents of Saint-Pierre had this heavily on their mind and further ignored warnings that Pelee was giving, no evacuations took place. On April 27th as ash fall lightened a team was sent up the mountain to investigate. They found Etang Sec filled with water which was boil and giving off a steady stream of steam. Two days later Riviere des Peres and Roxelane swelled as the crater over flowed, carrying debris down the flanks and causing chaos on their banks. But there was more to come…

May 2nd the explosions started again. The first at 11.30 pm created a huge eruption column of dense black smoke and blasts continued ever 5-6 hours through the night. As the ash column drifted over Saint-Pierre finally some residents began to flee. Thick ash covered buildings and roads hindering their escape. By May 5th things appeared to have calmed; then on part of the crater wall collapsed sending boiling water and lahars hurtling down the volcano. Several workers were killed and people fled to Saint-Pierre which was the opposite side to the lahars destruction.  The debris and water surging into the sea at the volcanoes base. At 1pm the sea retreated and a tsunami swept inland.  By 4am on Wednesday May 7th activity stepped up again on the volcano ash billowed and volcanic lightning could be seen around the summit . Though out the day people tried to leave Saint-Pierre but even more were trying to find refuge in the city from the area near the volcanoes flanks. People where frightened didn’t know what to do. News had spread that neighbouring island of St Vincent had also experienced an eruption and Saint-Pierre authorities tried to reassure people who this would relieve pressure in Pelée so the eruption would not get any worse.

As the day went on again things appeared to calm by on the morning of May 8th things took a drastic turn for the worst. Little after 7.50 am, telegraph transmitions from Saint-Pierre went dead. Witnesses which were on ships off shore said the side of the volcano completely gave way near the summit in one colossal blast. A dense black mushroom shape eruption column darkened the sky within seconds. At the same time a pyroclastic surge shot out perpendicular to the column and speed down the flanks towards Saint-Pierre at an estimated 670 km per hour. The surge glowed with its intense heat, ash and clastic material burning in excess of 1000 degrees Celsius, nothing in its path was safe. It’s description gave birth to a new term for such eruption, nuee ardente, french for glowing cloud.

Figure 3. Possibly the most iconic image of the aftermath of April 23rd. Figure 4. The prison cell which saved Louis-Auguste

An area just over 21 square kilometers was completely scorched or set alight including the city. At the time Saint-Pierre’s population was about 28,000, on May 8th it was likely that the figure was higher as people from nearer the volcano had sought refuge there. There where only two confirmed survivors. Louis-Auguste Cyparis who had been thrown in the towns jail the night before for involvement in a street brawl managed to be protected in his dark damp confines, although he did suffer quite extensive burns.  The second, Leon Compere-Leandre lived on the outskirts on the city, every on else in his house hold perished but he managed to flee, despite horrific burns, 6 km to neighbouring Fonds-Saint-Denis.

By midday, with no contact from Saint-Pierre, the acting governor based in Fort-de-France, sent the warship Suchet to investigate. It was hours before it could make land fall and people could enter the once grand city for the heat. When they did they found little remaining but the dead and devastation.

Aid was quickly sent to help with the recovery operation. The United States alone offered $200,000 and sent Naval staff to help. Canada, Germany, France Italy and Japan too offered assistance. But Mount Pelee was not finished.

The events of 1902 opened up many people’s eyes to the power and annihilation caused by eruption, many even believe it was the birth of the science of volcanology. It gave raise to terms such as nuee ardente and Pelean eruption and lead to further investigation in to eruption styles. When Mount Pelee came to life again in 1929 warnings were quickly heeded and evacuations took place. The most deadly eruption of the 21st century at least left a legacy which saves lives today.

The small Caribbean island of Jamaica is not one you usually associate with quakes but it does in fact transverse several fault lines. It lays where the Caribbean plate is moving westward relative to the Gonâve microplate with the main fault lines being the Enriquillo-Plantain garden fault zone in the east and the Walton fault zone to the west. The faults cause an average of 200 – 400 minor quakes a year on the island and is a part of the same fault system which cause the devastating Haiti quake of 2010. Jamaica its self has had a fair few big earthquakes, luckily there tends to be around 100 years between events. January 14th 1907 was one of the worst in recent history.

At 3.30pm local time a magnitude 6.5 earthquake along the sinstral strike-slip fault. Every house in Kingston was damaged and a local tsunami was triggered causing waves 6-8 ft crashing in to the northern coastline. Fires raged for hours after hindering rescue attempts for people trapped under the collapsed buildings.

It is estimated between 800 to 1100 people were killed although even official death tolls varied greatly. Over 10,000 were left homeless and over $25,00 000 worth of damage was caused leading it to be refered to as one of Jamaica’s worst natural disasters. Most of the damaged occurred in Kingston, although Buff Bay and Anotto Bay were also badly effected.

The main tremor lasted 35 seconds and was followed almost immeadiatly by a slightly weaker after shock. The only seismograph on the island was actually damaged by the earthquake meaning that magnitude and epicentre had to pretty much be guessed from witness reports. Over 80 aftershocks occurred over the next month pulling down already destroyed buildings. At the time buildings were poorly constructed to withstand any level of earthquake and this was made worse by the bedrock of the area being mainly unconsolidated sands and gravels meaning a greater intensity on the surface and ground deformation. 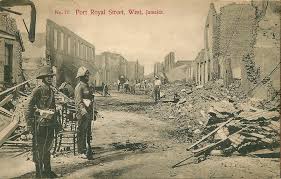 One positive outcome was the greater awareness of the seismic threat to the island. Building codes were put in place as the city was rebuilt to limit future destruction, earthquake and fire insurance became available to residents and better monitoring systems were put in place. Sadly a full seismic network was not put in place until after the 1957 Montego Bay earthquake.