Today marks the 130th anniversary of Tarawera bursting back to life after 500 years of sleep. It was one of New Zealand’s largest eruptions in recent history and killed up to 150 people making it the countries most deadly since the arrival of the Europeans.

Tarawara was last active in 1315 and is believed to have had a great hand in the Great Famine of 1315-137 throughout Europe. In 1886 the mountain gave little warning of up coming events. On June 1st a series of waves were recorded on the surface of Lake Tarawera suggesting seismicity in the area although no one reported feeling quakes and there where no seismometers at this time. Tourists claimed they saw a phantom canoe floating across the waters with Maori warriors on board. Although there were multiple accounts on the sighting many believed it was simply a rogue wave caused by increased seismicity, tribal elders at Te Wairoa however claimed that it was a waka wairua (spirit canoe) and was a portent of doom. 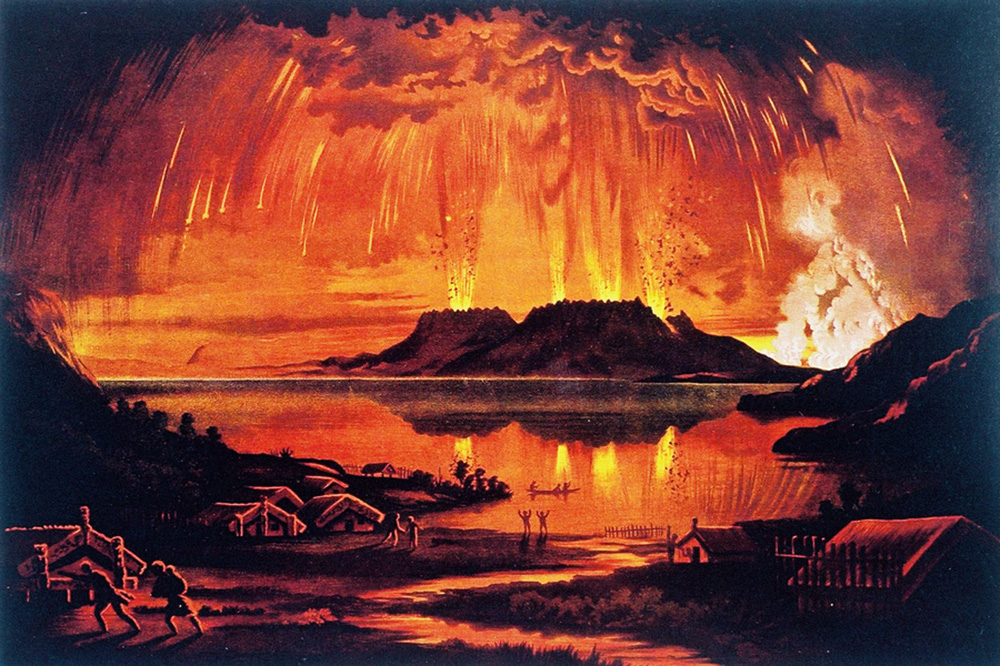 All was quiet again in the following days and people though little of the complex. Many geologists at the time didn’t even consider the edifice to be active due to the lack of solfataric or fumarolic activity in comparison to New Zealand’s other volcanoes.

At 2am local time on June 10th this all changed. Locals where awoken by large tremors shortly followed by explosions heard as far away as Blenheim over 500 km to the south. by 2.30 all three peaks of Tarawera were eruption with fire fountains lighting up the pitch black, ash filled skies. The eruption began to the northeast side and spread rapidly along a fissure from Tarawera to Lake Rotomahana into the Waimangu Valley. The eruption was believed to be caused by a series of basaltic dikes which rose from depth and intersected the very active hydrothermal system under Tarawera and Lake Rotomahana, causing rapid steam/magma explosions, driving the plume that was observed and creating, by some accounts, fire fountains as tall as 2 km which explains the high explosively of a basaltic eruption.

The darkened skys were seen as far as Christchurch and was catapulted in the stratosphere where it lingered effecting climate for at least a year. The ash fall from the eruption – called locally the “Rotomahana Mud” – can be found into the Bay of Plenty almost 40 km away. This tephra covered 15,000 km2 over the North Island and over 4,500 km2 of the area with at least 5 cm of tephra.

The eruption itself produced at least 1.3 km3 of tephra (~0.7 km3 of dense rock equivalent), likely at a rate of higher than 6 x 104 m3/s. It also produced a base surge that travelled over 6 km from the craters moving 40 m/s and were large enough to top hills that were 360 meters tall which buried several Maori villages.

The Buried Village Rotorua is now a popular tourist destination often branded New Zealand’s answer to Pompeii. As well as the human impacts it also buried the Pink and White Terraces.